The NASDA Foundation today announced Sage Dilts of Barn Owl Bakery as its 2019 Women’s Farm to Food Competition grand prize winner. The prize was awarded on the fringes of the 2019 Winter Policy Conference of the National Association of State Departments of Agriculture (NASDA) in Arlington, Virginia.

The NASDA Foundation established the Women’s Farm to Food Competition to support women leading agricultural and food businesses. “We created this competition as a new way to celebrate women farmers, producers and entrepreneurs who are diversifying their operations and creating unique approaches to developing value-added products,” NASDA Foundation Executive Director Lisa Benson said.

As part of the grand prize, Dilts was awarded $20,000 to help grow her artisanal bakery. Dilts competed against 238 applicants, and along with four other finalists, she pitched her business ideas before a panel of judges and an audience of state department of agriculture leaders during the NASDA Winter Policy Conference.

The People’s Choice Award, with $10,000 for business operations, was awarded to La Vang of La Vang Foods LLC in Hillsboro, Oregon, and the runner up prizes, including $5,000 for each business, were presented to Spring Alaska Olson of Sakari Botanicals and Lori Babcock of Tieton Farm & Creamery LLC.

“We’re proud to recognize outstanding women farmers and entrepreneurs,” said NASDA CEO Barb Glenn. “The passion and creativity these entrepreneurs have shown in their agriculture businesses is commendable.”

The Women’s Farm to Food Competition, in its first year, is dedicated to fostering growth among women entrepreneurs with food and beverage businesses in Oregon and Washington. “NASDA and the NASDA Foundation thank Oregon Department of Agriculture Director Alexis Taylor and Washington State Department of Agriculture Director Derek Sandison for their involvement with this groundbreaking event that provides incredible opportunities for women in agriculture,” Glenn said.

Farmers, fishers and ranchers, as well as women entrepreneurs who source from local farmers, were eligible for the competition. The women’s competition is part of the NASDA Foundation’s Women in Agriculture Project. 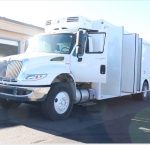